The Stingray Deluxe is a vehicle in Fallout 4.

A pre-War vehicle found both on display and crashed throughout the Commonwealth and on the Island.

The Tesla Science Magazine "Issue #5 – Giant Super Weapons!" features the Stingray Deluxe on its cover in a blue paint scheme and portrays it armed with four cannons, missiles, and rocket pods.

The Stingray Deluxe appears in Fallout 4.

The plane is labeled as "private jet" in the Art of Fallout 4.[1]

Crashed into a highway southeast of Quincy

On the small island east of the Museum of Witchcraft

On display in front of ArcJet Systems

Crashed in the highway south of Covenant

Crashed in the Glowing Sea with one wing broken off

On display at the Vim! Pop factory 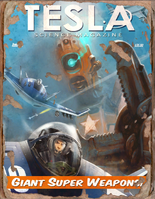