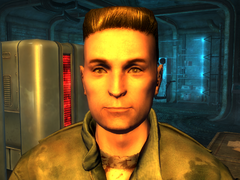 “Well, just above us is a deathclaw research facility. Most of the deathclaws are out fighting, but there might be one or two left. There are also a bunch of robots in the facility, and they're all controlled through the mainframe. There are also some military types left but not nearly as many as there used to be.”

Stiggs is a repairman specializing in robotics, located at the Adams Air Force Base in the year 2277.

A wastelander by birth, the Enclave found Stiggs in a malnourished condition, and brought him back to health from severe bouts of radiation poisoning. He was then put to work maintaining and creating the latest in flamethrower technologies for the Enclave, but he is troubled by these accomplishments.[1]

Stiggs appears only in the Fallout 3 add-on Broken Steel.

Retrieved from "https://fallout.fandom.com/wiki/Stiggs?oldid=3169931"
Community content is available under CC-BY-SA unless otherwise noted.