16 (during Growing Up Fast)

25 (during Escape! and further quests)

Escape!
Trouble on the Homefront

Hazel
Blue (Growing Up Fast only)

EyebrowM
None (Growing Up Fast only)

Evil (in Escape!)
Neutral (in Trouble on the Homefront)

Helps allies (Trouble on the Homefront only)
Helps friends and allies

“What are we going to do now? You've ruined everything!”

Stevie is 25 years old as of the events of Escape! He is a sadistic and gung-ho member of the Vault's security force, and willing to do anything to gain favor with his boss (Chief Hannon), including being particularly overzealous during emergencies.[Non-game 1]

He is responsible for the killing of Jonas Palmer.[1][2]

He is Susie and Wally Mack's brother, and Allen Mack and Gloria Mack's son.

* He will only drop a finger during Escape!.

* He will only wear the helmet during Trouble on the Homefront.

Stevie Mack appears only in Fallout 3.

A teenaged Stevie was originally slated to appear during the birthday party in Growing Up Fast. An unused model exists in the G.E.C.K., and a single line of dialogue for the quest can be found in the files, as well. 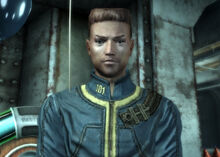 Stevie, as he would have been seen during Growing Up Fast