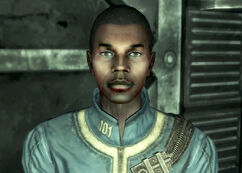 Steve Armstrong is found dead at Vault 101's entrance during Trouble on the Homefront in 2277.

The adopted son of Stanley and Beatrice Armstrong, Steve was sick for much of the Lone Wanderer's youth, and he is remembered vaguely, primarily through conversations with Stanley. Steve is found dead as one investigates the mob-rule at Vault 101.[1]

In the commotion of the rioting, Steve found himself near the entrance of the vault. His sneaking around did not go well and ended up being discovered by guards, and was consequently killed.

He is the adopted son of Stanley and Beatrice Armstrong.[1]

Trouble on the Homefront: Steve is one of the many youths found dead upon returning to the vault.

Steve Armstrong appears only in Fallout 3.

His body
Add an image to this gallery

Retrieved from "https://fallout.fandom.com/wiki/Steve_Armstrong?oldid=3186410"
Community content is available under CC-BY-SA unless otherwise noted.