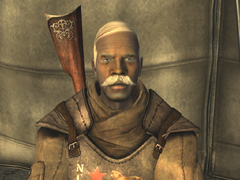 Sterling without his hat

“Nothing like a job done right. I wish I had a cigar.”— On killing Driver Nephi

Corporal Sterling is an NCR soldier serving at Camp McCarran in 2281.

One of the eldest members of the 1st Recon Alpha Team stationed at McCarran, Sterling wasn't always a trooper. Nearly a decade ago, in 2273, he was an NCR Ranger, one of the first to scout the Mojave Wasteland for the New California Republic. Over the years, he reckons he walked every inch of ground between Shady Sands and the Colorado, close enough to make his feet feel sore years later.[1] While his friends scoped out Hoover Dam, he took the lay of the land and learned about the local tribes and other folk, paving the way for the Mojave Campaign.[2]

His career as a Ranger would have continued, was it not for the fact that he was captured by legionaries on the other side of the Colorado, up near Malpais. They took a hammer to his hands and feet, breaking every bone they could find.[3] However, they made the mistake of not tying him up, as they figured Sterling wouldn't be able to walk away. They were correct. Instead, he crawled away on his knees and elbows, making it to the edge of the cliff and then tumbled down into the Colorado, figuring he wouldn't give Caesar's men the satisfaction of killing him. He was rescued from drowning by a unit of fellow Rangers, who pulled him out of the river after they saw him tumble down into the water.[4] Although he recovered, the hammers resulted in lasting damage that prevented fine control of a sidearm or long-range patrols that the Rangers were known for.[3]

While the Rangers would have given him an honorable discharge on medical grounds, Sterling was nothing if not persistent. He asked if there was a place for him in the military and was accepted into the Army after demonstrating his marksmanship skills. He was accepted together with other raw recruits. Lt. Gorobets had him transferred to 1st Recon, so that he can remain an asset to the Republic.[5] He continued to use his old rifle, the lever-action La Longue Carabine. Gorobets didn't object: As long as Sterling could hit his target, it didn't matter what he used for the job.[6]