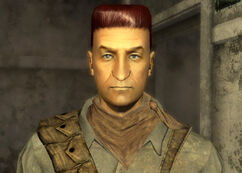 “Before you get your Ranger badge, you've got to prove you can be quieter than a shadow and more ferocious than a Deathclaw.”

Comm Officer Stepinac is an NCR Ranger posted at Ranger station Charlie in 2281.

When the commander of Ranger station Charlie, Ranger Beaumont, departed from his post to lead a mandatory patrol, he left Stepinac in charge of the outpost.

Recently, the ranger station had received an excess shipment of medicine and first aid equipment, which was more than necessary for a small outpost. The radioman is under orders from top brass to keep a close eye on the supplies. Highly loyal to his superiors, Stepinac is most unwilling to commit to any action that would get ordinary civilians into trouble with the NCR.[1]

Retrieved from "https://fallout.fandom.com/wiki/Stepinac?oldid=3188399"
Community content is available under CC-BY-SA unless otherwise noted.