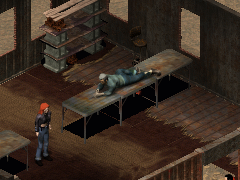 Stephen Barrett is a citizen of Junction City and the father of Casey Barrett in the year 2197.

During the first Reaver attack he was injured and became ill. The Warrior's squad came to ask his daughter Casey to join the Brotherhood. When Stephen was healed for her, she went to Bunker Delta. He raised Casey alone after her mother was stolen by raiders, Casey was just a baby at the time.