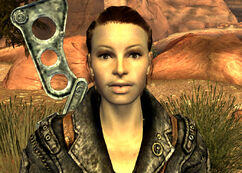 “That's right, little lady. Everything will be just fine with Jed to protect you. Quite the leader is what I am, hell yes.”

Stella is a caravan guard for the Happy Trails Caravan Company in 2281.

Stella grew up in New Reno and left at an early age to get away from the debauchery of it, believing that the answer to every problem was rule of law, although looking back, she knows that was naive.[1][2] After she left, she spent the prime of her life as the sheriff of Caliente protecting it from the 80s,[3] White Legs[4] and sometimes even the locals.[5]

One such experience Stella had as sheriff was when a band of 80s swept into town and dragged off two working girls. The deputies and Stella gave pursuit, straight into their territory. By the time they caught up with the girls, there was not much left of them. The girls were dead so the posse returned to Caliente but was watched the entire way by some 80s scouts.[3] Eventually she got tired of being a sheriff and took up a job as a caravan guard with Happy Trails Caravan Company. However, this new career would be the death of her as, in 2281, she was killed by a White Legs ambush in Zion Canyon.

Stella cannot be attacked or receive damage from the Courier in any way while waiting in the northern passage. If shot, struck, or any method of injury is attempted, she will not recoil from it or acknowledge it.

Retrieved from "https://fallout.fandom.com/wiki/Stella_(Honest_Hearts)?oldid=3489496"
Community content is available under CC-BY-SA unless otherwise noted.