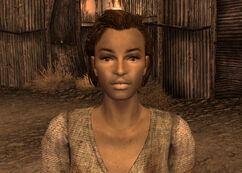 “I have a dangerous one for you - an NCR Ranger by the name of Stella. We got lucky, since we rarely capture Rangers alive.”— Otho

Ranger Stella is an NCR Ranger captured by the Legion in The Fort in 2281.

Stella is an NCR Ranger who was captured by Caesar's Legion during the assault on Ranger station Charlie, who is now forced to fight in the Legion arena at the Fort. She is very skilled in unarmed combat and has killed many high ranking legionaries, including an elite centurion, with nothing more than her bare hands.

Laurifer Gladiator: Stella is the last opponent Otho sets up for you to fight.

Retrieved from "https://fallout.fandom.com/wiki/Stella_(Fallout:_New_Vegas)?oldid=3133348"
Community content is available under CC-BY-SA unless otherwise noted.