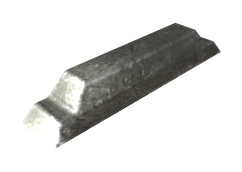 Steel ingots are miscellaneous items found in the Fallout 3 add-on The Pitt.

Ingots, in general, are considered bricks of raw materials (ex. gold bricks); these steel ingots would probably be melted down and used to make parts for armor, weapons, and gadgetry. Being made of pure steel, fresh ingredients to manufacture mint products would be something of a rarity in the Capital Wasteland. Finding all 100 gives you the Mill Worker achievement/trophy. Give them to Everett for special gear.

Following the guide below, it is possible and recommended to gather all 100 ingots in one run as the ingots are weightless at this point. Turning in the first 10 ingots and completing the quest will give any ingots collected afterward a weight of 1. Starting with the steelyard, the (X/Y) reference will be used. X shows the number of ingots a given location and Y shows the number of ingots total that should be in inventory after picking up the ingots at that spot. Keep in mind that steel ingots can be collected in any order and can still be given to Everett after completing the main quest line of The Pitt.

Note: Picking an Average lock (50 Lockpick) is required to gather all 100 ingots. Lockpick can be temporarily boosted by using chems and/or wearing apparel that increases PER and/or Lockpick skills.

WARNING: Xbox 360 and PS3 may freeze when entering so save here first!

Note: The first time entering, these ingots will be inaccessible. Returning to the area from the steelyard after collecting at least 10 ingots will reveal a trog that has torn a hole in the fence, allowing access to the mine cart. Note2: The hole will be there on your way back through after collecting the other 97 ingots.

One may fall through the roof when trying to reach the ingots from #23.[verified]

Retrieved from "https://fallout.fandom.com/wiki/Steel_ingot?oldid=3315640"
Community content is available under CC-BY-SA unless otherwise noted.