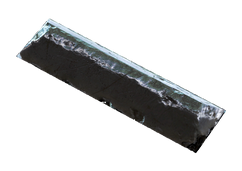 Steel is a crafting component in Fallout 4.

A cheap but highly useful metal alloy of iron and carbon and/or other metals, steel is the most plentiful crafting material, along with wood, found in-game and is a component used in crafting to make various items, including weapon modifications and structures. Steel is also used to repair damaged power armor.

Retrieved from "https://fallout.fandom.com/wiki/Steel_(Fallout_4)?oldid=3456528"
Community content is available under CC-BY-SA unless otherwise noted.