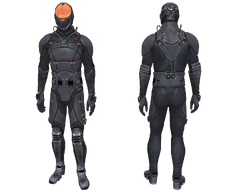 Stealth technology is a specialized application of physics to create a practical form of active camouflage. A modulated field of high-energy radiation[1] transmits the reflected light from one side of the affected object to the other, effectively making it invisible.[2][3]

To counter the United States' advantage in firepower provided by power armor, China focused on developing various forms of active camouflage. The principal and most widely deployed result was the Hei Gui stealth suit, allowing Chinese infiltrators and marksmen to exploit stretched supply lines and vulnerabilities in the frontline.[4]

Forced into a defensive, the Chinese increased their focus on stealth capability. By December 2075, reports of macro-scale research into the technology began to surface. The most disconcerting was the DIA's Predictive Analytic Machine concluding there was a high likelihood of the Chinese testing stealth technology at a macro scale (with 91% likelihood) and connecting it to earlier reports of a "Ghost Fleet", suggesting that submersible vessels equipped with active camouflage were already in testing. Although P.A.M. could not refine the answer and confirm the existence of stealth submarines when queried, due to a lack of data, the notion of macro scale stealth research occurring at Shaanxi was supported by an increase in imports of complex polymers and synthetic compounds to the province, necessary for such an endeavor. However, the idea was dismissed as "nonsense" and "ludicruous" by the general DIA asked to review the evidence.[4]

The underlying principle of bending light was harnessed by the United States from captured Chinese suits in two ways. Robert Mayflower of RobCo Industries reverse-engineered captured stealth armor to create the portable, but unstable Stealth Boy 3001 units.[3] The Enclave had originally created a Mark II prototype, intended to become modulated to use less power and thus last longer. In 2080, the Appalachian Enclave used the research present at the Fujiniya Intelligence Base to create the Stealth Boy Mark III.[5]

The research scientists at Big MT focused more on the suit itself and its stealth-enhancing properties, taking the Chinese suits apart and then designing a new stealth suit from scratch. This resulted in the creation of two prototypes before the war: the assassin suit and the stealth suit mk II, which surpassed the original in nearly every aspect, apart from the active stealth field.[6]

Stealth technology has appeared or has been mentioned in every Fallout to date. 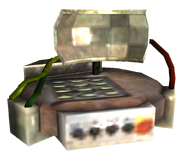