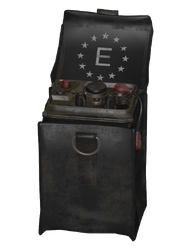 The Stealth Boy Mark III is a consumable item in Fallout 76.

This is a superior version of the satchel Stealth Boy, with an operating time three times that of the standard version. It is a piece of Enclave technology, sold by the MODUS production terminal in the Whitespring bunker.

The model for the Stealth Boy Mark III was created by Jarrod Hollar.[1]

Retrieved from "https://fallout.fandom.com/wiki/Stealth_Boy_Mark_III?oldid=3495322"
Community content is available under CC-BY-SA unless otherwise noted.