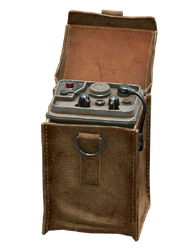 The Stealth Boy is a portable device that, when activated, renders the user invisible for 30 seconds.

Unlike variants of the Stealth Boy found in New California as well as the Capital and Mojave Wastelands, this version isn't worn on the wrist. Instead, it is activated by hand and is held on the waist, like a satchel.

Loading screen
Add an image to this gallery
Retrieved from "https://fallout.fandom.com/wiki/Stealth_Boy_(Fallout_4)?oldid=3126439"
Community content is available under CC-BY-SA unless otherwise noted.