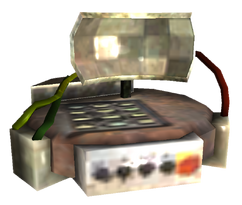 The Stealth Boy is a consumable item in Fallout: New Vegas.

The RobCo Stealth Boy 3001 is a personal stealth device worn on one's wrist. It generates a modulating field that transmits the reflected light from one side of an object to the other, making a person much harder to notice (but not completely invisible).

While they seem to not have any adverse effects on humans, Stealth Boys increase the risk of schizophrenia in nightkin, who, as permanent Stealth Boy users, nearly always show one or several symptoms of paranoid schizophrenia, such as paranoia, hallucinations and/or delusion. Doctor Henry in Jacobstown is researching these side effects, hoping to develop a means to help the nightkin.

Retrieved from "https://fallout.fandom.com/wiki/Stealth_Boy_(Fallout:_New_Vegas)?oldid=3494908"
Community content is available under CC-BY-SA unless otherwise noted.