The RobCo Industries Stealth Boy 3001 is a personal stealth device.

One of the most interesting technologies developed before the war, the Stealth Boy 3001 is a wrist-mounted device that generates a modulating field that transmits the reflected light from one side of an object to another (called stealth radiation[1]). The end result is practical invisibility, which can range from translucency to near-perfect active camouflage.[2][3]

The underlying principle of bending light to create invisibility wasn't invented by the Americans. Robert Mayflower, the man responsible for creating Stealth Boys under RobCo's aegis, reverse-engineered captured Chinese Hēi Guǐ stealth armor.[4] The technology wasn't perfect, but proven itself reliable enough for military purposes. In fact, it was enough to convince the military to have had these devices mass produced.[5] Even more, work started on a more advanced Stealth Boy mark II prototype.[6] After the Great War, developed by Enclave scientists in Appalachia, the Stealth Boy Mark III was an overall improvement of the Stealth Boy, coming at the cost of reverting back to a specialized canvas holder design rather than a wrist-mounted design.

There are drawbacks to the Stealth Boy, however. Apart from limited battery life, particularly when used at full power to achieve total invisibility, the modulating field can cause permanent neurochemical changes,[7] resulting in the development of mental conditions, such as paranoia, delusions, hallucinations, and even schizophrenia.[8] This is by far most noticeable among the nightkin, former elite members of the Unity and their prolonged Stealth Boy use and apparent increased susceptibility of super mutant physiology to stealth radiation. Nightkin tend to suffer from delusions, anxiety attacks (particularly when deprived of their Stealth Boys), and heightened aggression (particularly when trying to acquire Stealth Boys to cope with their withdrawal symptoms). Treatment is difficult and usually focuses on symptoms, due to the inability to address the underlying cause (yet).[9][10]

Some time after they acquired the Stealth Boy technology, the Brotherhood of Steel experimented with those devices. When the side effects were discovered, the devices were banned and the team disbanded. However, it was not known that the team had already begun to suffer the effects of the device. Thinking the disbanding of their team to be a conspiracy, they decided to steal the Stealth Boys and form a new covert operation called the Circle of Steel.

The first generation of the Stealth Boy. This variant of the Mark I Stealth Boy was bulky and needed to be encased in a canvas waist pouch to be actively used. Later models would miniaturize and wrist mount their devices for more convenience.

The Stealth Boy 3001 is the most common variant of active camouflage devices in the wastelands. Lightweight, wrist-mounted, and portable, they offer a number of power settings allowing anything from total invisibility to partial translucency.

The Stealth Boy Mark II prototype is an enhanced Stealth Boy, put through testing by the U.S. military shortly before the Great War. According to Doctor Henry, its purpose was to use less power and therefore last longer.

Developed by Enclave scientists in Appalachia with the help of Chinese schematics and MODUS,[11] the Stealth Boy Mark III was the total improvement of the Stealth Boy. While no longer wrist mounted (instead reverted back to a canvas box), the power consumption rate was drastically lowered from the Mark II Stealth Boys allowing for longer invisibility time until power was drained.

A satchel model Stealth Boy modified by the Order of Mysteries with a cloud of HalluciGen gas that cloaks the user, frenzying nearby enemies.

The secretive organization The Railroad gained access to a more powerful variant of the normal Stealth Boy. Their resident engineer Tinker Tom sells the devices to trusted agents.

Although it is mentioned in Fallout 2 and its description is present in Fallout Tactics files. The device's backstory wasn't developed until Van Buren, the canceled Fallout 3 by Black Isle, where it was spelled as StealthBoy to prevent it from being confused with the "Stealth Boy" playing style. Subsequent games incorporated much of the backstory into the mainstream canon. 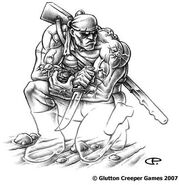 Retrieved from "https://fallout.fandom.com/wiki/Stealth_Boy?oldid=3134204"
Community content is available under CC-BY-SA unless otherwise noted.