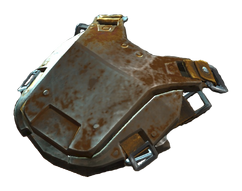 The Steadfast BOS combat armor chest piece is a unique armor in Fallout 4.

This chest piece has the Bolstering legendary armor effect, which grants increasing Energy Resistance and Damage Resistance the lower the Sole Survivor's health is (up to +35). Changing the armor material to something besides Brotherhood at a work bench will not remove the "BOS" from the armor's name.

Obtained from Lancer Captain Kells at the end of the quest The Lost Patrol if the player character turns the quest in to him instead of Paladin Danse, and if they have convinced Paladin Brandis to rejoin the Brotherhood of Steel.

To be able to do this, the player character must have already joined the Brotherhood, and then completed the mission Show No Mercy. Afterward, Kells will give the player character The Lost Patrol quest, or they can turn it in to him if they have already begun it on their own beforehand by stumbling on dead members of the patrol and not turned it in to Danse. Danse will also give the player character The Lost Patrol if they complete Call to Arms for him before killing Kellogg and triggering the arrival of the Prydwen in the Commonwealth. Regardless of how one starts the quest, waiting until one can turn it in to Kells is the only way to get this armor in addition to the quest completion XP.

This armor can spawn as either a standard, sturdy or heavy combat armor chest piece, depending on the player character's level when taking the quest.