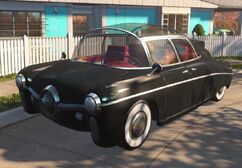 The Station wagon is a vehicle found throughout the Commonwealth.

This four-door Station wagon was a popular car model before the Great War, and remains the one most commonly found in the wasteland. Its design allowed the Station wagon to offer seats for up to six or seven people, a canopy roof, and a streamlined rear with two trunks, one on each side of the fusion reactor.

The Station wagon appears in Fallout 4.

The vehicle draw design influences from the Studebaker Starlight and the Tucker 48.

Sanctuary Hills residents trying to outrun the bombs by car

Frontal view of the Station wagon

From the driver's seat

Loading screen
Add a photo to this gallery
Retrieved from "https://fallout.fandom.com/wiki/Station_wagon_(Fallout_4)?oldid=3523379"
Community content is available under CC-BY-SA unless otherwise noted.