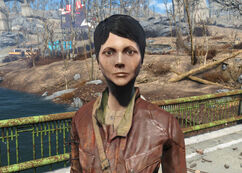 Stash is a chem dealer living in the Commonwealth in 2287.

Her parents were hooked on chems when they named her, but Stash thinks her name suits her. She travels the Commonwealth dealing chems, accompanied by her bodyguards Lexa and Simon.

Stash's story, along with those of her companions, unfolds in a series of random encounters. Initially encountered at a choke point random event, Stash introduces herself alongside both of her bodyguards, siblings Lexa and Simon. It is revealed through dialogue with Stash that Simon is not only her bodyguard but also her addicted customer, which irritates Lexa.

Assuming the first encounter is completed with all parties alive and friendly, the trio will be encountered a second time at a fluid random event. Stash is pleased to see that the wasteland has not consumed the Sole Survivor and once again offers her bartering services. She mentions that Lexa has become increasingly agitated regarding Simon's addiction to chems and that she has plans on trying to confront Simon and break his addiction.

The final encounter with Stash is at a campsite random event, where her slain body can be located, the majority of her chem supply being unaccounted for. Simon and Lexa are nowhere to be seen. Later, Simon can be encountered during a fluid random event alongside a group of raiders that he has joined, offering no dialogue and being instantly hostile.

Stash appears only in Fallout 4.

When encountered again, she may not speak, only say: "Yes?," "Yeah?," and "Huh?," even if she and the Sole Survivor parted on friendly terms and a trade was made. Her companions will be just repeating their old dialogues from the first encounter. [verified]

Retrieved from "https://fallout.fandom.com/wiki/Stash?oldid=3176511"
Community content is available under CC-BY-SA unless otherwise noted.