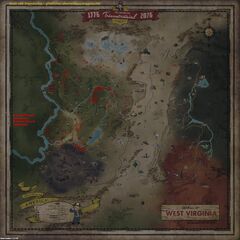 Starlight berries are a consumable item in Fallout 76.

Starlight berries are yellow berries harvested from a starlight creeper bush. They can be consumed raw to satisfy a small amount of hunger with a medium dose of radiation and chance of disease, or can be cooked for additional benefits.

When affected by a blast zone, starlight berries will turn into kiloton creeper which can be harvested for raw cobalt flux.

In a removed Vault 94 greenhouse terminal entry, the starlight creeper was referred to as Parthenocissus quinquefolia, or the real world Virginia creeper.[1]