The Starlight Drive In is a location and possible settlement in the Commonwealth in 2287.

As the name implies, this location is a drive-in movie theater with a large three-story screen and a parking lot filled with the rusted hulls of destroyed cars. There are three major structures: the screen, the shack that houses the workshop and the diner attached to the projector tower.[1]

In the middle of the lot is a large water-filled crater containing a number of extremely radioactive barrels; however, removing the barrels through the workshop will stop the severe radiation. Once this has been done, the area will no longer be radioactive, although the water will still cause radiation damage if consumed.

The diner has an active bottlecap mine serving as a booby trap inside the main entrance if the door is opened from outside; avoid the trap by entering from the second floor via the collapsed roof and disarming it.

The top of the screen is accessible by way of the stairs inside the screen, though there are armed land mines on the landings. A handful of locked rooms behind the screen contain useful supplies and building materials, and can also be used to shelter beds for settlers prior to constructing more centrally-located housing.

The Starlight Drive In appears only in Fallout 4.

Room behind the projector

Floorsafe in the back storage

Back storage key in the footlocker 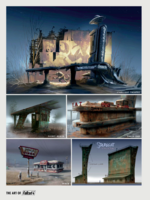 Concept art for the Starlight Drive In