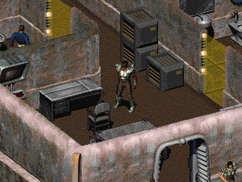 Chief of the Guard

“I am Citizen SERGEANT Stark, Citizen. Was there something I could help you with?”

Citizen Sergeant Stark is the head of the Corrections Center in Vault City and the chief of the Vault City guard in 2241.

Stark is a huge black man in heavy armor.[1] He oversees patrols, city defense, is responsible for maintaining peace and order within the city walls and is the de facto military leader of Vault City. He is a very loyal and obedient soldier, enforcing laws to the letter and always following orders from his superiors, no matter what they might be.

Stark appears only in Fallout 2 and mentioned in the Fallout Bible.

Retrieved from "https://fallout.fandom.com/wiki/Stark?oldid=3350556"
Community content is available under CC-BY-SA unless otherwise noted.