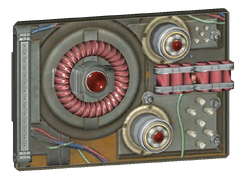 The star core is a quest item in the Fallout 4 add-on Nuka-World.

The STAR (Systemized Telemetry for Automated Robot Control) cores, were designed for robot control across the entire park, based in the Galactic Zone. The actual technology utilized a series of highly redundant, interchangeable telemetry modules, known as "star cores." At runtime, the cores would establish a radio communications interlink between the mainframe and the linked robotic systems, allowing the mainframe to coordinate their actions and issue commands irrespective of their underlying operating protocols.

After the Great War, the Galactic Zone became a ground for traders from Nuka-Town USA to acquire scrap materials for use and trade. Eventually, the traders came across the Star Control mainframe and its star cores. Kendell Alston, thinking his daughter Tiana Alston's explanation that the cores were "redundant" meant they were okay to take and sell, removed most of them from Star Control's mainframe. However, it was around this time that Colter and the Nuka-World raiders took over Nuka-Town, leading to the idea that Star Control mainframe's defensive mode would be able to defend them from the gangs.

Shortly thereafter, Tiana realized that they had taken too many cores and that it was unsafe to activate, and sent other surviving traders to gather enough cores to safely activate the defensive mode. However, Kendell decided they needed the defenses online sooner, and despite Tiana's warning and assurances they only needed an hour to gather enough cores, Kendell activated Star Control. As the robots and defenses in the park came online, they began attacking the traders within the Galactic Zone.[1]

Star cores are redundant multi-purpose control panels consisting of a black circuit board with glowing red lights. They are necessary for taking over the Galactic Zone during the quests Star Control and The Grand Tour, but they can also be picked up during normal exploration. Only 20 of the total 35 star cores are required for the quest. Collecting the full set unlocks the display case which holds the Quantum X-01 power armor, provided Nuka-World's power has been restored by completing Power Play or Open Season.

There are 35 star cores in total.

Vault-Tec: Among the Stars

Splashdown
Add a photo to this gallery

Junkyard star core bug, "star core" text is missing, but can still be picked up
Add a photo to this gallery

Retrieved from "https://fallout.fandom.com/wiki/Star_core?oldid=3479130"
Community content is available under CC-BY-SA unless otherwise noted.