Star is a member of the Blood Eagles in Appalachia.

Star joined the gang approximately two weeks prior to Beckett. She was already "amped" when she was recruited, and the other Blood Eagles did not have to give her their spiked Buffout to mess with her mind and indoctrinate her. Beckett claims he once saw Star kick a defenseless woman off of a cliff, and wants her eliminated. She is a mechanics expert who has been given the mission of making a recruitment radio broadcast for the Blood Eagles.

Star appears only in Fallout 76, introduced in the Wastelanders update.

Star if she spawns masked 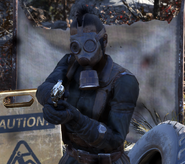 Star if she spawns with a mohawk

Star if she spawns with patchy hair 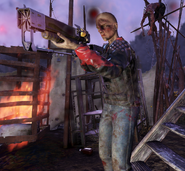 Star if she spawns bald
Русский
Community content is available under CC-BY-SA unless otherwise noted.
Advertisement