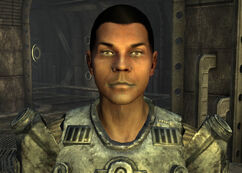 “Still, I haven't been exiled yet, or worse, assigned to latrine-cleaning duty. But I will, if you don't help me find that gun.”

Initiate Stanton is an initiate of the Mojave Brotherhood of Steel, patrolling in the Hidden Valley bunker in 2281.

Stanton and Melissa Watkins were sent to the scorpion gulch to fight the radscorpions there, as part of a training exercise outside of the bunker. They apparently realized the scorpions were too much for them to handle so they fled back to the bunker. Unaware that he did, Stanton dropped his laser pistol while fighting the scorpions. He was the last person to check out the laser pistol, and filed a false report to the effect that he returned it. Stanton risks being assigned to the latrine-cleaning duty, or even exiled if the missing laser pistol is not returned. Unfortunately, he cannot return to the scorpion gulch to recover the laser pistol because entering and exiting the bunker without authorization is not possible due to the bunker's state of lockdown.

He can be found sleeping around 9:30am in the easternmost room of Hidden Valley bunker L1. During the afternoon, he can often be found in class sometimes hiding behind the blackboards.

Retrieved from "https://fallout.fandom.com/wiki/Stanton?oldid=3125613"
Community content is available under CC-BY-SA unless otherwise noted.