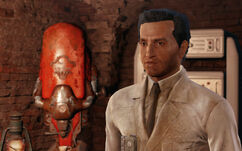 Doctor Stanley Carrington[1] is the medic and the second-in-command of the Railroad in 2287.

Doctor Carrington provides health and medical services to the agents of the intelligence organization known as the Railroad. He is also Desdemona's righthand man. However, he relates that this has minimal impact. The doctor is easily exasperated and irritated, though he claims this to be because of the Railroad's numerous setbacks and losses. He sometimes questions Desdemona's tendency to send agents on dangerous missions to gather intelligence when said intel is already more or less known.

Back when the doctor was stationed at the organization's former headquarters, the Switchboard, located in Lexington, he managed to escape when it was stormed by Institute synths. In the confusion of the attack, Carrington left behind a prototype of an unknown device, which one of the Railroad's main field operatives, Deacon was assigned to a mission to recover.

Retrieved from "https://fallout.fandom.com/wiki/Stanley_Carrington?oldid=3416059"
Community content is available under CC-BY-SA unless otherwise noted.