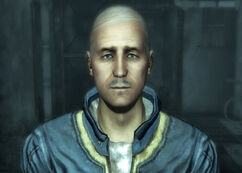 Green
Blue (Growing Up Fast only)

Stanley Armstrong is a technician in the maintenance department of Vault 101 in 2277.

Sweet, always worried and not very bright, Stanley is the father of Beatrice, Mary and Gloria. Stanley and Andy are responsible for keeping the vault running. They tend all the machinery and act as janitors.[1]

On July 12, 2268, Stanley repairs the water purifier. This repair is a point of discussion between himself and Amata Almodovar when they engage in small talk the next day.

On that same day, Stanley performs routine maintenance on the pipes in the corridor outside the cafeteria. Midway through his work, he attends the birthday party of the Lone Wanderer. Though the Overseer presents the Pip-Boy 3000A to the Lone Wanderer, it is Stanley who selects the model. Though he admits that some might find the 3000A basic, Stanley believes the series is very reliable. Before the conversation ends, he gifts the Lone Wanderer with a kid's baseball cap.

In the 2270s, Stanley is diagnosed by James as suffering from stress. The stress is caused by overworking and exhaustion. The symptoms listed in a medical file include severe and chronic headaches and eyestrain caused by the lamps in his apartment. For treatment, James prescribes aspirin. By mid-2274, James expresses reticence in doing more for Stanley. As James types in his medical file, he acknowledges that Stanley may refuse rest and that the overseer will refuse any changes in the work schedule, and concludes that aspirin is the only option for the immediate future.

On August 3, 2274, Stanley visits the clinic complaining of severe headaches and insomnia. Jonas confers with his patient and decides that further testing may be required. Jonas asks Stanley to wait as the clinic is prepared for the tests.

Stanley is the father of Beatrice Armstrong, Gloria, and Mary. Stanley's constant companion is Andy, a Mister Handy robot, that aids his human friend in cleaning and maintaining the vault. Stanley is friendly with the vault physician James and his child. However, he still says "Good riddance, get out" when the Lone Wanderer is exiled out of the vault after Trouble on the Homefront.

** Only during Growing Up Fast

*** Only during Trouble on the Homefront

Although he himself is Caucasian, all his three daughters (and possibly Mary) are Asian.

Stanley Armstrong appears only in Fallout 3.

Stanley, sitting at the bar during Growing Up Fast

Retrieved from "https://fallout.fandom.com/wiki/Stanley_Armstrong?oldid=3314192"
Community content is available under CC-BY-SA unless otherwise noted.