Doctor Stanislaus Braun is the overseer of Vault 112, locked by his own choice in a Vault-Tec prototype simulation in which he appears as a young girl named Betty. Before the Great War, Braun was a brilliant scientist working for Vault-Tec, serving as the head of Future-Tec and the creator of the Garden of Eden Creation Kit

Hailing from the German town of Kronach in Bavaria,[1] Dr. Stanislaus Braun is a talented scientist who developed a long, varied career before the Great War. Braun served as the director of Vault-Tec's Societal Preservation Program,[2] as well as the department head of Future-Tec.[3] Braun had a large role in the Vaults' true purpose as sinister scientific experiments.[4] Braun was also in contact with other Vaults,[5] managing their activation and assignment.[6]

Among his experiments were ones involving the field of advanced life preservation. The United States Army contracted Braun to develop various methods of sustaining human life in case of nuclear war.[Non-canon 1] Braun was eventually credited as the sole developer of the Garden of Eden Creation Kit, described as a "fully self-contained terraforming module capable of creating and sustaining life, even amid a desolate nuclear wasteland."[2] When the Great War broke out, Braun escaped to the safety of Vault 112 and remains there in 2277. He left behind his aging, pre-War body in favor of a new virtual life, voluntarily sealing himself in the Vault's simulation loungers.

In the current simulation world of "Tranquility Lane," Braun has created an ideal, pre-War neighborhood and taken up the identity of a little girl named "Betty." As "Betty," Braun speaks in the perfectly simulated voice of a real little girl but once he is revealed, he tends to alternate between the "Betty" voice and his real voice. Most of the residents of Tranquility Lane are unaware of Betty's nature, though Timmy Neusbaum knows that she is "mean."[7] The only person who is fully aware of Betty's true nature is Old Lady Dithers.[8]

For the past two centuries, Braun has been repeatedly creating and exploring new simulated worlds such as "Toucan Lagoon" and "Slalom Chalet," but often becomes bored and began manipulating the simulations to impose cruelty on the other vault dwellers in the simulation, as an attempt to entertain himself. A failsafe terminal in Tranquility Lane shows that Braun commissioned the "Chinese Invasion Failsafe," a means of permanently killing the inhabitants of Vault 112, but much to his disappointment it will not kill him, which would leave him trapped alone in the simulation.[9]

When James approached Braun for assistance in retrieving the one usable Garden of Eden Creation Kit in the Capital Wasteland, Braun trapped him in a simulator pod, forcing James to become a dog in Tranquility Lane.

If the Lone Wanderer tries to harm Betty in Tranquility Lane, even after completing the quest, Betty will say they cannot do that in the simulation, and make them pay by instantly killing the Lone Wanderer in what appears to be a pulse blast.

Stanislaus Braun appears only in Fallout 3. He is mentioned in Fallout 4[12] and its add-on Vault-Tec Workshop,[14] as well as the Fallout 76 update Nuclear Winter.[2][13]

In an interview with 1UP.com, Emil Pagliarulo stated that Betty was partially inspired by the Twilight Zone episode "It's a Good Life," in which a small, willful child who was born with godlike powers is able to isolate the entire small Ohio town from the rest of the world and keep the population as his own personal playthings, tormenting, torturing and killing them at will.[15]

Braun in the Tranquility Lane lounger 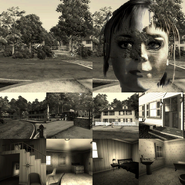