Fallout 2
“Head north up Virgin street, past the casinos... follow the trail that leads outside of town. You will... come to the Stables.”— Big Jesus Mordino

The Stables is a research lab northwest of New Reno, just outside the city limits. Controlled by the Mordino family, the Stables are the primary production and research site for the family's Jet-driven empire. The site takes its name from its previous purpose; it is a converted stable and livestock pen.

The Chosen One is granted access when tasked to deliver Big Jesus's package to Ramirez at the Stables by Big Jesus Mordino who also gives the directions.

There are two basic functions of the Stables. The eastern warehouse building is concerned with the production and packaging of Jet. Here, a small army of slaves labor endlessly under the careful eye of armed guards, packaging and loading canisters of Jet. From here, the canisters are transshipped to New Reno, where they are sold, put on caravans, and sent to nearby communities like Redding.

The western building is the testing center and namesake to the facility. Little more than a converted set of livestock pens, these literal stables house a small, wretched population of slaves used for drug testing. They are continually subjected to doses of Jet in an effort to improve the drug's effects and safety. Much of this research is overseen by "doctor" Marjorie Reed, while security of the building is handled by a Mordino thug named Ramirez.

There are also brahmin left to mill around in a fenced-in grazing area between the two buildings because brahmin dung is a component in Jet production.

The ace in the hole

The Mordino family's prize, however, is kept below ground, in tunnels that link the two buildings. Adjacent to the guard quarters lie the spacious lab and living quarters that are the exclusive domain of Myron, the Mordino family's drug-making whiz-kid.

Since the facility in general, and Myron in particular, represent the keystone of the Mordino empire, the Stables are very well secured. Numerous guards, all heavily armed, patrol the compound, and entrances to both buildings are secured behind chain-link fence topped with razor wire. Although the existence of the Stables is known to the general public, the exact location is not, lending more security to the site. Security around Myron's lab is especially tight: two armed guards are present at all times.

The Stables appear only in Fallout 2.

West, the main building where the Jet experiments on the slaves are carried out; the water-tanks are in the East building 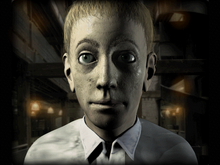 Myron, Mordino family's genius and the creator of Jet. He can be found in the underground area of the Stables