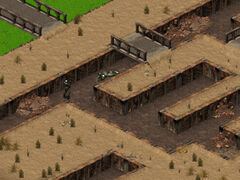 Burke, hiding in a trench near Toccomatta's stronghold

St. Louis is the eighth mission in Fallout Tactics.

After your briefing, go to the workbench to get two Repair, one Pilot skill books and two tool kits. Bring your whole squad into the APC and have them lock and loaded. Most of the super mutants here have M249 SAWs, with one or two M60s so when you kill them, take the weapon to replace your AK47 and other guns.

Go to point 1 and just drive by all the super mutants and let your squad do all the work. After you arrive at point 1, you will then be asked to go to point 2. You cannot get the APC through all the narrow spaces, so you'll have to go on foot. A good way to take out all of the super mutants hiding in the maze, is to drive the APC Diagonally on top of the maze, and shoot them down as the Mutants appear, this way you are protected and your squad doesn't get cornered in the tight spaces. After you reach the gate near the super mutant base you'll see a man lying down, that is Burke. Talk to him and he'll ask you to disarm (and take) the C4 that is attached to him. Use your Traps skill and then after you defuse the C4, he'll tell you about his undoing and then appears to commit suicide. DO NOT go inside the super mutant base from this entrance because the traps are nearly undetectable and you will be easy pickings for the mutants who carry Browning M2s with .50 Cal DU rounds. Even if you go there with advanced power armor, they'll take you out quickly. However, if you kill one (or more), it will grant several hundred experience points. But it is a very difficult fight since they are well armed as well as tough.

If you are determined to go through this entrance do this. If you still have Farsight, or any other sniper character, give them a sniper rifle (the first one in the game is found in St. Louis) and have them go prone in front of the bridge that leads to the base. Have that character pick the super mutants off from a distance. The super mutants cannot hit you here and eventually some of them will run out of ammunition and run down the trail to try and get to you. When they do this they will set off the traps and die, clearing the path for you. After you've killed at least the super mutants at the front entrance have you sniper move to the top of the path and NOT into main part of the base, have your other team members follow behind. After your sniper kills the two by the center bunker it gets much, much easier. Put your sniper in a strategic point and have ALL of your other characters find the last few remaining mutants. See if they can kill one on their own, if not try to lure the mutant into the line of sight of your sniper.

However, there is a second entrance: instead of going right up the path from the bridge follow the path to the right to the rear of the base. Stay low to avoid getting shot and at the rear of the base, near the edge of the map, there is a hidden "staircase" that will allow you to flank the super mutants in the base. The battle will be difficult but the rewards of experience, weaponry, and ammunition are well worth it. However, entering the base is not part of your objectives and can be skipped. Go back to the APC and go to point 3. Be cautious, some of the mutants will surprise you with a couple rockets from their rocket launchers if you are rushing, also, the path you will likely go through is covered with 24 mines, so send a teammate with good Perception/Traps to disarm or destroy all the mines. After you see the destroyed BOS Humvee, go down and the Paladin Solo will tell you to heal her team. (If you don't have a medic, stimpaks will do nicely.) After you heal everybody fully, they'll go inside the APC. If you don't have enough medkits, there are several inside a chest inside the enemy bunker to the northwest. Now just go back to the insertion point using this guide (only backwards) until you see the exit grid.

If you have a squad member with a high Sneak skill and a decent Throwing skill you can collect the frag grenades (there are easily 60+ available on the map) from the various super mutant corpses and then sneak them into position just to the left of the ramp leading into the super mutant command center (keep them 'prone' while doing so, and until the guards are dead). From here you can safely lob grenades up to where the two guards are, eventually killing them. They'll drop all of their absurdly heavy DU ammo. Just try not to get your squad member blown to bits when you run up to retrieve it. 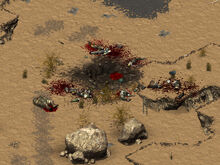 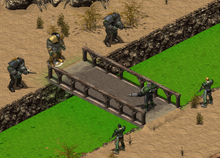