Point Lookout
“The lighthouse. He's got a lab under there, the little fuck. Right under my nose the whole time!”— Desmond Lockheart

The St. Aubin medical facility (called underground lab in-game) is a location in Point Lookout in 2277, found beneath the Point Lookout Lighthouse.

Before the Great War, this facility was used for research into improving the process of extracting and isolating human brains, pioneered by General Atomics for their robobrain robots. It was discovered that by manipulating the mixture for the bio med gel, it was possible to achieve the effects previously thought impossible. Not only could the brain retain its full mental capacity under the right circumstances, but it could also project images and thoughts into other minds. This opened the door not only to applications in battlefield technologies but also, for example, interrogation methods. The only concern was whether being isolated in biogel for years might have undesirable psychological effects.

Senator Calvert had his brother, Professor Calvert, transferred to the project not much later. Sometime after that, the latter had his own brain extracted, allowing him to survive the Great War and receive psychic powers. Now, he operates the laboratory with his robots and dreams of entering the minds of as many people as possible. However, his goal is hindered by Desmond Lockheart, a ghoulified secret agent, and his long-time nemesis.

The underground lab is the location of the final Point Lookout main quest, A Meeting of the Minds. It is here that the final confrontation between Professor Calvert and Desmond Lockheart takes place.

The underground facility is a more-or-less straightforward path from the entrance one arrives at with Desmond until the central antechamber where the actual brain of Professor Calvert is contained. The path winds ever downward, with side rooms and laboratories branching off from the central corridor. These rooms usually contain useful materials, particularly crafting compoments, scrap metal, and energy weapon ammunition; energy cells in particular. Along the way, there are several locked doors that can be opened by key-cards of increasing security clearance.

However, these keys are in possession of the primary opponents in the facility: namely, General Atomics' robobrain automated security. In addition to the robots, several turret robots activate at regular security checkpoints. 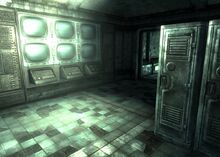