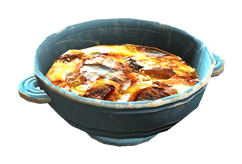 A squirrel stew is a consumable item in Fallout 4.

The squirrel stew will boost your Experience Points gain by 2% for 120 (real-life) minutes on top of regenerating 105 Hit Points.

Can be crafted at any cooking station.

Although black bloodleaf has identical effects as regular bloodleaf when consumed raw, it cannot be used as an ingredient for squirrel stew.

In Survival mode, if the squirrel stew is used to satisfy both the Parched and Peckish effects simultaneously while another food bonus is already in effect, this food bonus will become permanent. The bonus description will disappear from the Status menu the moment the squirrel stew is eaten but the bonus itself will remain and can be checked in the SPECIAL page or in the affected stat section if such bonus involves Damage Resistance, Energy Resistance or others. Some bonuses cannot be checked without console commands, so if one wishes to avoid accidentally exploiting this glitch, it's best not to use the squirrel stew while another food bonus is in effect.

Retrieved from "https://fallout.fandom.com/wiki/Squirrel_stew_(Fallout_4)?oldid=3182971"
Community content is available under CC-BY-SA unless otherwise noted.