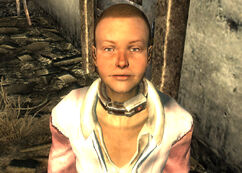 “Sammy says you want to know the plan. Well listen up, mungo, because it's a good one. I'm super smart.”

Squirrel (real name Peter[1]) is a 13-year old[1] boy from Little Lamplight who needs to be saved from Paradise Falls in 2277.

Squirrel was born in 2264. He is 13 and has a knack with computers and electronics. As such, he is an important member of the scavenging team, because he's the only person who can tell how valuable a piece of scientific hardware is. He's been caught recently, but he's working on an escape plan. He's also sickly, often visiting Lucy for some sort of medication. Inside Lamplight, he spends a lot of his time reading, playing with electronics, and trying not to do anything too stressful.[1]

He says his nickname came from his inquisitive nature, but other Lamplighters say it's because he's "nuts".

Rescue from Paradise: Squirrel is the brains behind the escape from Paradise Falls. He will task you with everything you need to do to get them out.

Squirrel appears only in Fallout 3.

Retrieved from "https://fallout.fandom.com/wiki/Squirrel_(Fallout_3)?oldid=3410852"
Community content is available under CC-BY-SA unless otherwise noted.