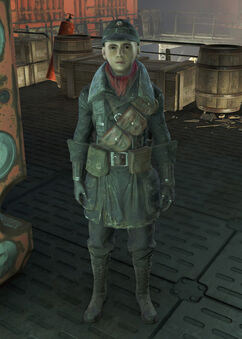 The Squire's uniform is a piece of clothing in Fallout 4.

The Squire's uniform is the standard apparel of all Brotherhood squires aboard the Prydwen. It bears similarities to various World War II uniforms, supplemented with a thick red scarf underneath the padded jacket and a peaked cap with the Brotherhood insignia displayed on the front. Several large pouches are fastened to the uniform's belts, one of them strapped diagonally across the wearer's chest. A voluminous brown leather backpack is carried on the back.

The squire's uniform grants its wearer a +2 bonus to Endurance but nothing in terms of resistances.

Retrieved from "https://fallout.fandom.com/wiki/Squire%27s_uniform?oldid=3037951"
Community content is available under CC-BY-SA unless otherwise noted.