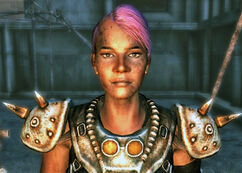 “And don't worry, I'm sure I'll find some excuse to take a potshot at you later. So we can all look forward to that!”

Squill is a purple-haired raider in the Pitt in 2277.

Squill is a former slave who fought her way through the arena. She is one of only three slaves who have accomplished this, the others being Gruber and Reddup. Squill mentions that she often fires into the arena from the spectator area if the fight is not exciting enough. She also mentions that when this was done to her when she was a gladiator slave, she shot back.

Squill appears only in the Fallout 3 add-on The Pitt.

Retrieved from "https://fallout.fandom.com/wiki/Squill?oldid=3358117"
Community content is available under CC-BY-SA unless otherwise noted.