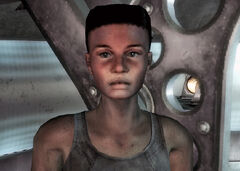 Corporal Spurlock is found dead aboard Mothership Zeta in the cryo lab in 2277.

A proud medic attached to the 108th Infantry Battalion, Corporal Spurlock was used to the sight of blood, arterial sprays, and lost limbs. However, after a quick and frightening abduction when the medical squad became separated from the main infantry forces, Spurlock fought hard to control her fear as she was still awake for most of her own dissection. Spurlock succumbed to massive shock and internal bleeding, and her corpse awaits the Lone Wanderer somewhere in the Cryo Lab.[1]

Corporal Spurlock appears only in the Fallout 3 add-on Mothership Zeta.