Spruce Knob is a location in the Savage Divide region of Appalachia. It was a public workshop with claim and defend event quests. As of 2103, the location has been occupied by Settlers and turned into the settlement of Foundation.

Spruce Knob is the highest peak in the former state of West Virginia, at an elevation of 4863 feet (1482 meters) above sea level. The Allegheny Mountains peak served as a natural spot for an observation tower, maintained by the Monongahela National Forest, overlooking the Spruce Knob Lake. The 900-foot tower was a tourist attraction and was eventually expanded with a monorail station to allow direct access to the camping grounds beneath the tower.[1]

After the Great War, the tower made a natural strongpoint and observation post for the Appalachian Brotherhood, who established a communications center and lookout tower on the observation deck. However, with the scorchbeasts causing havoc all across Appalachia, they were forced to withdraw and abandon the installation, leaving the fortifications behind in a usable state.

When the Settlers occupied Spruce Knob, they built the settlement of Foundation, a place that became their main headquarters and where they could start rebuilding Appalachia. Since then, houses, windmills, craft stations, shops, and more structures were built with wood, steel, and salvaged components, changing the area completely.

The observation tower is a highly visible landmark and consists of the aforementioned tower and monorail station, flanking the sides of State Route 101. The tower provides a commanding view of the surrounding area, especially the lake, and contains a tinker's workbench. At the foot of the tower was the local workshop, allowing player characters to claim and build in the area. The location contained food (4), water (4), gold (3), copper (1) and acid (1) resource nodes, combined with an excellent defense capability. The observation tower provided a good place to build defensive turrets to defend the workshop area from attacks, especially from scorchbeasts when they attack to take out the resource extractors during a Defend Workshop quest.

Spruce Knob appears only in Fallout 76.

In real life, Spruce Knob is the highest point in West Virginia and the summit of Spruce Mountain, the highest peak in the Allegheny Mountains. It has the exact same altitude as its real counterpart. 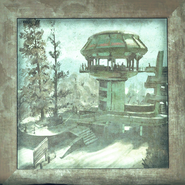 A painting of Spruce Knob