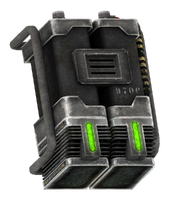 The Sprtel-Wood 9700 is a unique energy weapon in the Fallout: New Vegas add-on Gun Runners' Arsenal.

The Sprtel-Wood 9700 is a high-speed Gatling laser that shoots green lasers. It has an ammunition capacity of 90 electron charge packs and moderate weapon spread. The Sprtel-Wood 9700 can inflict 16 damage per hit in good condition, but it has a slightly below-average critical hit chance for an automatic weapon.

The Sprtel-Wood 9700 can fire a total of about 4,995 times using standard packs, the equivalent of 56 reloads, from full condition before breaking.

The Sprtel-Wood 9700 is an homage to Scott Sprtel, a medical student who died in 2003 in a biking accident, and Brian Wood, a game designer at Relic Entertainment who was killed in a traffic collision.[1]

Retrieved from "https://fallout.fandom.com/wiki/Sprtel-Wood_9700_(GRA)?oldid=3188772"
Community content is available under CC-BY-SA unless otherwise noted.