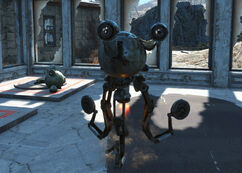 “Our dependable line of Mr. Handy household robots will free you from the drudgery of housework forever.”

Sprocket is a Mister Handy found at the General Atomics Galleria in 2287.

Sprocket will then direct the Sole Survivor to the other side of the shop where one deactivated Mister Gutsy is stood on a platform next to a destroyed one. The Mister Gutsy prototype will then start-up and attack, which may lead to Sprocket becoming hostile as well.

Sprocket appears only in Fallout 4.

Retrieved from "https://fallout.fandom.com/wiki/Sprocket?oldid=3296181"
Community content is available under CC-BY-SA unless otherwise noted.