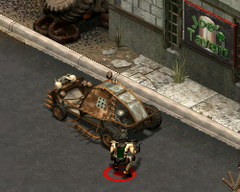 A raider guarding the buggy

Springfield is a bonus mission in Fallout Tactics.

Stealth is made particularly difficult in this mission due to the large number of burning oil drums and the patrolling dogs. Many of the buildings have windows; the civilians inside make it more likely you'll be detected. They also can suffer collateral damage from burst fire and shotguns.

When you arrive, speak with Carino the guard. There are no enemies in the house to the West but there is a chest with some ammunition. Approach the barricade across the road. Through the gap you can see the buggy outside Joe's Tavern. A number of raiders and dogs patrol it and a lone ranger lurks in the alleyway behind the Tavern. Shotguns and burst-fire may damage the buggy so use targeted shots and try to draw the enemy into an ambush waiting behind the barricade.

Jump in the buggy and drive it to safety somewhere near Carino (but not too close to the edge of the map as that becomes a fast travel zone). You can return to the buggy throughout the mission and drop off any loot to avoid getting encumbered.

Sneak up the West edge of the road toward the L-shaped sandbags. From the porch of the double-story gray building you can take out the raider behind the sandbags and a whole row of them crouching behind the corrugated iron barricade. The female civilian in the South Easternmost room of this building has an AK47 you can steal. The breeze-block chapel to the South contains a pot near the front containing some ammunition. One of its occupants has Cherry Nuka-Cola.

After leaving the chapel, follow the Western edge of the map up to the stairs. Near the top of the stairs is a raider who throws grenades. Follow the balcony anticlockwise: through the first room's window you can take out a raider crouching next to a trapped door; the next pair of windows reveal more raiders waiting behind sandbags to ambush you. Having neutralized their threat you can walk safely through the central corridor to the middle Eastern room. Take out the raider and open the chest to receive 1000 XP.

Return to the Western edge of the map. Sneak North to the pile of logs; just to the East are two raiders guarding the alleyway. Dispatch them then sneak East to the edge of the fence. Looking back South you'll see the backs of two raiders hiding behind tires and a dead ghoul. There may be some 7.62mm ammunition lying on the ground also. The ladder stuck to the back of the Northern building takes you to a nice sandbag area where you can gather your party before assaulting the three snipers at the roof's edge. If you find the fight hard, shoot the gas canisters for extra area damage though you won't get any XP for raiders they kill. If there are any remaining patrols on the road, take them out. The central ladder leads to a generator room and an (unlocked) safe which gives you 1000 XP.

The South edge of the roof has a fire escape leading down to a balcony with a trapped door. Sneak inside to discover a sleeping raider defended by anti-personnel mines. You can disarm and collect them. There is also a crate containing regular-flavor lockpicks. You have now defeated all the enemies in the first part of the map and can run around talking to and robbing the civilians as you please. The guy behind the counter in the two-story house (the only remaining building West of the road) has some drugs. Upstairs is a woman staring out the window; you can steal from her "Papers (no desc.)". One of the patrons of Joe's Tavern has some After Burner gum. You can take some beer from the bar.

In Planet Donut you can see pre-War Donuts but you can't reach one of them. Upstairs is a chest. Presnell will opine and barter. You can loot her fridge.

When ready, click on the fence-gate North of Planet Donut. Dogs and burning oil drums hinder stealth while raiders in trenches hinder health. Near the podium is another fence-gate which can only be unlocked by the mayor's dialogue. Continue South, past the executed ghouls in the firing squad range. Two of the barricades are explosive. Try to crouch and sneak up to the first sandbag wall. When you stand you can point-blank execute the raider behind it and may set off the nearby barricades. There is a disappointing crate near the South wall of Joe's Tavern.

Head to the market area. Here you will find a super stimpak and various food items on the tables. The bar has beer and booze on the counter. A couple of civilians have gum. The tribal has antidote. Rather than walk through the fence-gate into an ambush, circumnavigate the bar anticlockwise and approach the ruins from the South. The advantage here is that you get to shoot the raiders in the back; the disadvantage is there are anti-personnel mines. At the base of the southern steam chimney is a chest which yields 1000 XP.

The campanologist in the church's bell-tower has a great view, but only an AK47. You can hug the wall as you sneak toward the door, taking out the two guards at the railings when they become visible. In the church dungeon is a dead ghoul, trapped with an active Claymore. There is also a stimpak lying on the ground. To the South-West is a square breezeblock building sporting a large tank. It contains a white fridge and a crate behind a red fridge; both replenish your ammunition.

Now for the head assassin. His team is initially non-hostile until you trigger his dialogue therefore take advantage of this and position your team. The church has two tiers where you can place snipers with a good clear view.

When ready, send well-armored close-range types up beside the fence-gate. This will trigger the dialogue and subsequent carnage. You get 2000 XP for killing the head assassin. Inside the building is the mayor and even more non-kosher flags. As soon as you talk to him, the fence-gate leading toward the podium opens (though it remains locked) and you get 3000 XP.

The mayor delivers a heart-rending speech to the applause and disapproval of his subjects. You can return to Carino but he stubbornly assumes a doubting Thomas attitude, insisting that he see the mayor with the Warrior before he believes. Even planting the mayor's clipboard onto Carino won't budge his denial. As you cannot convince the mayor to move, the only way to prove you have accomplished your mission is to put all your team on the exit grid. At this point he believes as demonstrated by his speech bubbles, but you're already on the way to the fast travel map.

Note that although the Hummer you are used to can take 6 passengers, the buggy can only take 2.

This mission is only available if you have the 4th bonus CD or installed a patch designed for this purpose. It also can be made available manually by using notepad to edit the "bos.cfg" file in the "core" directory. Find this line: {misc.bonusMission} = {false} Change the "false" to "true" and save the file.