Normally, the Brotherhood doesn't meddle in politics, but this offered them a chance to increase their hold on this resource rich province and the Elders decided to send a Brotherhood squad to Springfield to protect Avellone from a plot uncovered by the Brotherhood's Dagger Squad, who captured one of the ringleaders to this plot. He told the Brotherhood interrogators that these resident troublemakers would be dressed as raiders, which was a clumsy attempt to frame the local bandits. The Warrior soon arrived and liberated the town from occupation. These ghoul-hating "raiders" turned out to be quite an organized group consisting of regular members and so called enforcers - much more experienced warriors. Even though they awaited the Brotherhood's arrival and had already build some barricades, they were all killed, including their leader - the head assassin.

Springfield in game has much in common with the fictional town of Springfield in the long running TV series The Simpsons. Such as the two large cooling towers for a nuclear power plant, the town's statue which looks a lot like the statue of Jebediah Springfield, as well as the large sign for "Planet Donut" which is reminiscent of Lard Lad Donuts. Another clear example is "Joe's Tavern" which is a reference to Moe's Tavern. In episode Lemon of Troy, the town of Shelbyville is depicted as a copy of Springfield, even having its own Moe's Tavern complete with Moe, only named Joe, owning Joe's Tavern. 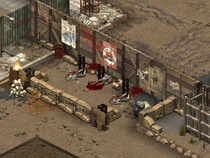 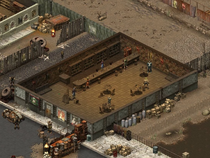 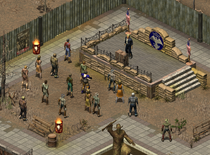 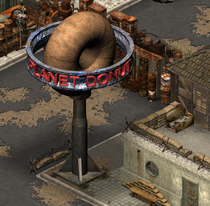 Add an image to this gallery
Retrieved from "https://fallout.fandom.com/wiki/Springfield?oldid=2684840"
Community content is available under CC-BY-SA unless otherwise noted.