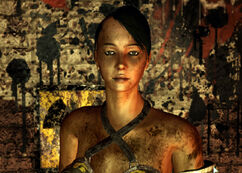 “Haha! So you're the dumbass scab that signed up to fight in the Hole, huh?”

Spook is a Pitt raider who guards the entrance to The Hole in 2277.

An odd little lady, Spook guards the entrance to the arena and is friends with Faydra. She enjoys her job which involves drinking beer and shouting at the Pitt slaves wandering the upper gantries inside the Mill. She has placed her teddy on a locker overlooking the arena so he can watch the fights too.[1]

Spook appears only in the Fallout 3 add-on The Pitt.

Retrieved from "https://fallout.fandom.com/wiki/Spook?oldid=3369374"
Community content is available under CC-BY-SA unless otherwise noted.