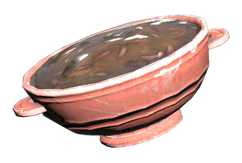 Spoiled meat is a consumable item in Fallout 76.

Spoiled meat can also be converted into raw fertilizer at a chemistry station.

Replaces meat products in the player character's inventory when it becomes spoiled.

Retrieved from "https://fallout.fandom.com/wiki/Spoiled_meat?oldid=3381242"
Community content is available under CC-BY-SA unless otherwise noted.