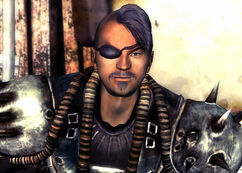 “Take a seat and relax already. You're making me nervous.”

Split Jack is a bandit leader in the Capital Wasteland in the year 2277.

Once a raider, Jack cleaned up his act and began to marry his ruthless tendencies with a head for business. Some may say "Split Jack has an eye for business," (his only good one), for extortion, and he is currently leading a group of bandits as they attack, accrue, and he hopes extort Aqua Pura from anyone they meet. He is mildly psychotic, though this is not always obvious.[1]

Split Jack is always at Wilhelm's Wharf, "leading" his crew.

Split Jack appears only in the Fallout 3 add-on Broken Steel.

Retrieved from "https://fallout.fandom.com/wiki/Split_Jack?oldid=3444619"
Community content is available under CC-BY-SA unless otherwise noted.