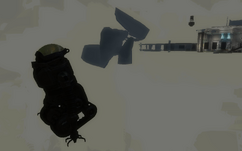 Spencer, outside the vault

Spencer Lords is a robobrain that was cut from the Fallout 4 add-on Far Harbor.

Spencer is placed outside of Vault 118 and can't be reached without the use of console commands. Judging by cut audio dialogue, he was meant to be an author and murder victim, rather than Ezra Parker.[1]

Spencer Lords was cut from the Fallout 4 add-on Far Harbor.

Retrieved from "https://fallout.fandom.com/wiki/Spencer_Lords?oldid=2711914"
Community content is available under CC-BY-SA unless otherwise noted.