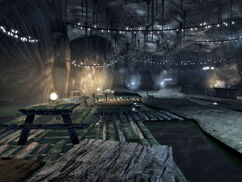 “Right here. Welcome to our fungus pools. Eat up!”

Spelunkers is a restaurant in Little Lamplight, run by Eclair. Eclair started the store when he became interested in cooking.

There are two tables, one has plates on it where you can sit down, and the other table is where you buy food from Eclair. There is some free cave fungus on a plate which you can take. There is a fridge that can only be opened with Eclair's key, which must be pickpocketed, and it has lots of free food in it. Surprisingly, taking any food out of the fridge will not count as stealing. There is also a set of metal shelves, with three ammunition boxes on it. There is also a pool in there, which you can push people into. This water is the water where the first Little Lamplighters threw the bodies of the mungos in, however no remains can be found.

Spelunkers appears only in Fallout 3.

There is a cell named LLSpelunkerRestaurant defined in the G.E.C.K.. The walls, floor, and ceiling are incomplete and it contains no items or furniture.

Retrieved from "https://fallout.fandom.com/wiki/Spelunkers?oldid=2747512"
Community content is available under CC-BY-SA unless otherwise noted.