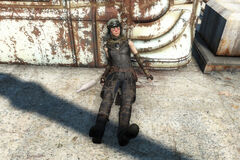 We came here from D.C. to get help. Talon Company mercs attacked GNR station, and with the Brotherhood forces scattered, our asses were exposed.

Our only hope was the radio. We sent out an SOS to everyone and anyone, asking them to help us fight the good fight. The Commonwealth responded.

But it turns out these "Gunners" aren't down for the cause. I would've been a dead woman if I didn't come in for a slow landing. Might still be a dead woman, given they're still on my six.

In fact, if you're reading this, that means my corpse is too cold for stimpaks, so this letter will have to do.

If the good fight means something to you, then take this bird and fly off to the Capital Wasteland. Save GNR from the Talon mercs and shut down the radio before they get on air.

And if you see the Good Man, tell him I'm sorry.