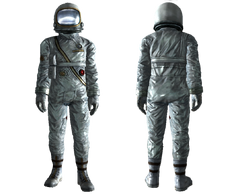 The spacesuit is a piece of clothing which is added to Fallout 3 in the Mothership Zeta add-on.

It provides a Damage Resistance of 1 and has very high item health (10 million HP). Radiation suits and advanced radiation suits can be used to repair it. This suit will not protect from radiation sources. While completing the quest Not of This World, the player character will unfreeze people from different time periods. One of them, Colonel Hartigan, died allowing one to loot his spacesuit. It will be located in the pod to the far right. 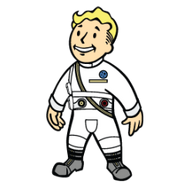 As depicted in Among the Stars 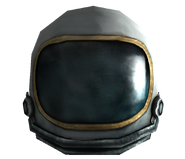