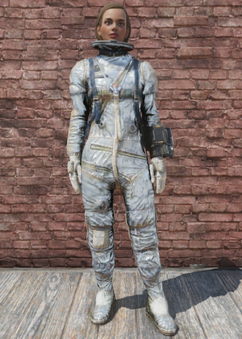 PER -2, Prevents damage and disease from airborne hazards. 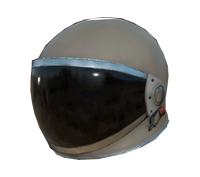 The spacesuit, clean spacesuit and spacesuit helmet are outfits in Fallout 76.

The spacesuit is a reflective sheen jumpsuit with straps along the back and front with pockets along the entirety of the suit. The helmet has the same foil-like sheen with a full black visor, albeit with a slightly yellowed and aged appearance.

The clean variant of the spacesuit features a much brighter and shiny chrome appearance compared to the standard variant. The helmet is white and polished to a shine.

There is a nametag with the first name obscured, but with the last name "Cooper" visible on both the dirty and the clean suit's upper right chest.

A bright orange variant can be purchased from the Atomic Shop. It is decorated with various cloth patches and is in much better condition than the suits which can be found in the world. It is a cosmetic item which is worn on top of other armor.

This variant can be purchased from the Atomic Shop for 800

The spacesuit is a very close replica to the Navy Mark IV spacesuits used in the Mercury program. The name tag reads "G...o Cooper," with the first name being obscured by one of the suit's black straps. This appears to be a reference to astronaut Gordon "Gordo" Cooper Jr., the Pilot of Mercury-Atlas 9 in 1963 and the Command Pilot of Gemini 5 in 1965. 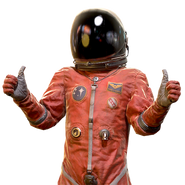 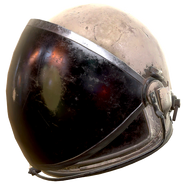 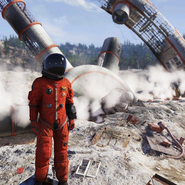 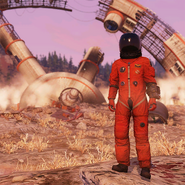 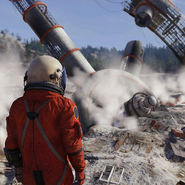 Atomic Shop promotional image
Add a photo to this gallery
Retrieved from "https://fallout.fandom.com/wiki/Spacesuit_(Fallout_76)?oldid=3430363"
Community content is available under CC-BY-SA unless otherwise noted.