Mothership Zeta
“Now you're gonna have to go outside of the ship. I know it looks scary, but that's the only way to the top. Oh! Make sure you wear a spacesuit before you go out there or you could die! Don't forget!”— Sally

The space walk is a location outside of Mothership Zeta in 2277.

The space walk cannot be entered without the spacesuit being worn. The player character cannot use the Pip-Boy or use any weapons on the map. There are no enemies, although the Lone Wanderer can see some aliens scurrying around the corridors below them. The player character must locate three panels that stand out slightly from the ship's hull. They are emitting a yellow glow to make them obvious. Activate all three panels and the transporter to the next portion of the ship will become available. The transporter is located directly in the center of the circular hull the player character is traversing.

The space walk appears only in the Fallout 3 add-on Mothership Zeta.

After re-entering the ship through the top, the compression chamber may display "This door cannot be opened until the decompression sequence in completed". Every time the player closes it, it pops up again preventing action such as forward movement. If one comes across this, keep closing it while pressing forward, get to the activation panel ahead and activate it, just keep pressing okay to close the pop up, once the room fully is compressed the pop up stops. [verified] 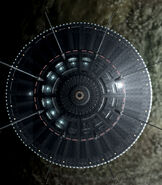